Attraction Response Of Mosquitoes When Exposed To Cdc Light Traps

As a well-known vector of diseases such as Yellow Fever, Dengue, Chikungunya, and Zika virus the Aedes aegypti have remained a global health issue. The ancestral roots of this species are suspected to have begun in the sub-Saharan region on the continent of Africa as a tree-hole laying mosquito that feeds primarily on warm-blooded animals (Brown et al. 2011). Since its rapid spread around the world, this species of Aedes has been successful in spreading to most of the warmer regions along the equator and is now found in large areas of Asia and most of North and South America (Lambrechts et al. 2011). With a well-documented expansion amongst urbanized human settlements, the number of illnesses transferred by this species has only increased with population growth and expansion over the last 50 years (Weaver 2014). Artificial human-made containers that store water, such as used tires, provide perfect breeding sites for Aedes aegypti and has resulted in these mosquitoes being shipped around the world through the movement of these containers (Harrington, et al. 2001). Over time, the preference of host feeding has changed in this species from their original zoophilic tendencies to the modern-day anthropophilic feeding behavior with adjusted feeding times primarily to the period when humans are most active. (Scott and Takken 2012). Aedes aegypti feeding times are reported by the Center for Disease Control and Prevention (CDC) as mostly occurring several hours prior to sunset and for two hours after the sun rises (CDC.GOV 2012). These adaptions to diurnal biting habits and being most active during the day likely contributes to the mosquitoes’ showing little attraction to the incandescent light sources used in standard suction traps (Hoel, et al. 2009; Thurman and Thurman 1955).

The first initial creation of the battery-operated CDC light trap in the 1960’s by Drs. Dan Sudia and Roy Chamberlain provided a lighter alternative to earlier suction light trap designs (Sudia and Chamberlain 1962). Since its creation, the CDC light trap has become one of, if not the most widely used trapping systems for insect surveillance programs (Cohnstaedt et al. 2008; McDermott and Mullens 2017). After shortcomings of incandescent light bulbs were identified, the utilization of UV bulbs began in the 1950’s and significantly increased the capture rate of light traps (Pfrimmer 1955). In attempts to improve the capture yield of these traps, several additions to surveillance traps have been implemented over time. A well-known attractant used by many entomologists, which bolstered the effectiveness of these traps, is CO2 dispensed from a canister or produced by dry ice (Reeves 1951). In addition to CO2, many chemical attractants have been created in the attempt to increase the capture rate of light traps; these include 1-octen-3-ol, lactic acid, butanone, and BG Lure with various success (Kline et al. 1994; Kline and Mann 1998; Dekker et al. 2002). A more recent innovation in light trap technology is the use of a wide range of different colored LED’s to save energy and attempt to improve capture counts (Hoel et al. 2007; Cohnstaedt et al. 2008).

Studies have determined that mosquitoes are attracted to 365nm wavelength of light when used in surveillance traps (Burkett and Butler 2005). The overall lack of attraction to the incandescent light utilized in many mosquito traps is thought to be due to mosquitoes primarily seeing in the ultraviolet, blue, and green spectra of color (Briscoe and Chittka 2001). Incandescent bulbs cover a wide area of the light spectrum with most light in red/infrared wavelengths and only minor presence of the lower blue, green, and the ultraviolet ranges of light (Cohnstaedt et al. 2008). UV light is described as wavelengths less than 400nm and exposure to this light source can influence behaviors such as mating, host-seeking, circadian rhythms, and oviposition, through mediation within their compound eye (Day 2005; Hunt et al. 2001). The compound eyes found in mosquitoes follow a typical arrangement of the retinal photoreceptors R1 through R8 configuration, each rhabdomere expressing various rhodopsin’s (Brammer 1970, Hu et al. 2009). Testing of photoreceptors and rhodopsin genes expression in Aedes aegypti through exposure to ultraviolet light has shown that these insects’ optical genes are responsive to distinct UV spectra (Hu et al., 2014).

Most of the suction-based light traps have utilized incandescent or UV fluorescent bulbs as attractants until more recent additions of LED technologies have been implemented (McDermott and Mullens 2017). LED can produce a very narrow range of bandwidth to entice the preferred insect. These ranges can be set between 350nm (UV) and 700nm (infrared) with the highest quality LEDs showing an omnidirectional spread of light to 120-degree angle (Cohnstaedt et al. 2008). These refined uses of specific spectra of UV light spectrum could prove pivotal in attracting Aedes aegypti, and other desired species because many insects can detect changes of wavelength as minute as 10 nm (Snyder et al. 2016). During a test of a UV black light (BL) bulb and a UV LED in a Malaria-endemic area of South Korea, significantly larger capture rates and diversity of species captured were obtained with UV LED lights with a peak at the 365 nm wavelength (Kim et al. 2017). Among the species caught in the test conducted in South Korea, the most frequently captured mosquito was identified as Aedes vexans which accounted for over 80% of the total capture in both the BL and UV LED versions of the trap (Kim et al. 2017). The upgrades in quality of LED lights, reduction in price, and utilization of specific light spectra provide the potential for increasing the effectiveness of light traps.

–          Evaluate the trap preference of Aedes aegypti males, host-seeking females, and blood-fed gravid females when traps are run against one another in an enclosed laboratory environment.

–          Compare the capture of native mosquitoes’ species in field locations

We hypothesize that the modification of the CDC light trap utilizing the SVC UV LED modified light source will be more attractive to lab reared Aedes aegypti and various outdoor species than CDC light traps utilizing BL and incandescent bulbs.

With the prices of LED technology dropping and the increase in the quality of UV LED’s coming onto the market, further testing and evaluation of both quality and effectiveness of these new lights are needed. These tests will focus on the attractiveness of a CDC light trap modified with UV LED when compared with the CDC light trap equipped with BL bulb or incandescent bulb. This trap and others utilizing LED technologies could improve vector surveillance yields, decrease trap energy requirements, and lower cost of surveillance when compared with current trapping methods.

Aedes aegypti will be provided from the “Orlando” strain colonies maintained at the United States Department of Agriculture (USDA-ARS) located in Gainesville, Florida. Mosquitoes will be used between 1 and 3 days old for males, and 4 to 7 days old for females to ensure full visual development and mating. During this development time, the specimens will be provided with full access to 10% sugar water for feeding. Ageing of the mosquitoes will be accomplished by allowing pupae a 24-emergence time before moving the pupae into a new unoccupied cage and repeating the process. The bioassays of males will be conducted on days 1 to 3 after emergence, followed by the females from days 4 to 7. When blood feeding is required for females in experiments, it will be from chickens maintained by Urban Entomology staff following (IACUC 201603836) protocols. Blood feeding will happen on day four of female mosquito development with testing being run 48 hours after blood feeding on day 7. Specimens will be aspirated and chilled briefly in a lab freezer and placed on ice before sorting, counting, and putting into groups for release into enclosures.

Lights will be examined via an Ocean Optics® 2000 USB spectrometer.

Timed capture-rate tests will be conducted in a darkened room with three separate testing groups of Aedes aegypti males, host-seeking, and blood fed gravid females. Each group of 50 mosquitoes will be released into separate 24X24x24 inch rearing cages containing either a CDC with UV LED, CDC with UV BL, or CDC with incandescent lights. Trap location within the room will be rotated after each repetition. Mosquitoes will be given 30 minutes to wake up after being sedated over ice in small containers and then an additional 15 minutes within the rearing enclosure to acclimate to the environment before starting the traps. The room will be kept at 23 and 26 degrees Celsius and overhead room lighting will be turned off to minimize competing light sources in between counts. After the traps have been launched, capture counts within each will be hourly over 4 hours. This process will be repeated for male, host-seeking females, and 48-hour gravid females for a total of 10 repetitions.

Three trap preference testing will be compared in an enclosed room utilizing trap A, B, and C. Groups of 100 mosquitoes will be released into a controlled room with each trap placed in a separate corner of the room and rotated after each run. Mosquitoes will be allotted 30 minutes to wake up after being sedated over ice in a small container and then released into the room with the overhead lighting turned off to minimize any competing light sources. The testing will start between 4:00 and 5:00 each afternoon and will be stopped and collected in black fine meshed draw string bags between 9:00 and 10:00 each morning. This process will be repeated for male, host-seeking females, and 48-hour gravid females for a total of 10 repetitions.

An outdoor traps comparison run utilizing (A), (B), and (C). Three locations where selected in UF’s NATL and the surrounding area. Site selection will be limited to areas in which power sources can be utilized to run the UV LED light source attachment. Sites will be labeled as one, two, and three with individual traps being placed at each one. After each rep, the traps will be rotated to the next site. A total of 30 nights of trapping will be conducted starting between 4:00 to 5:00 in the afternoon and completed between 9:00 and 10:00 in the morning. The number captured in each trap will be documented and mosquitoes will be identified down to species and compiled. 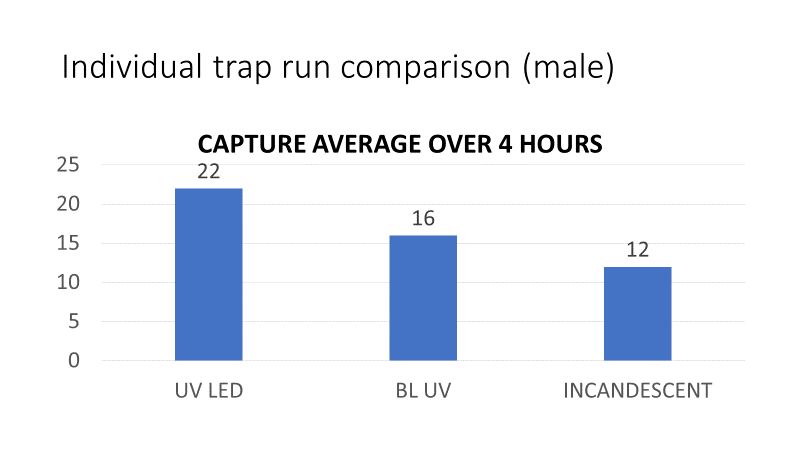 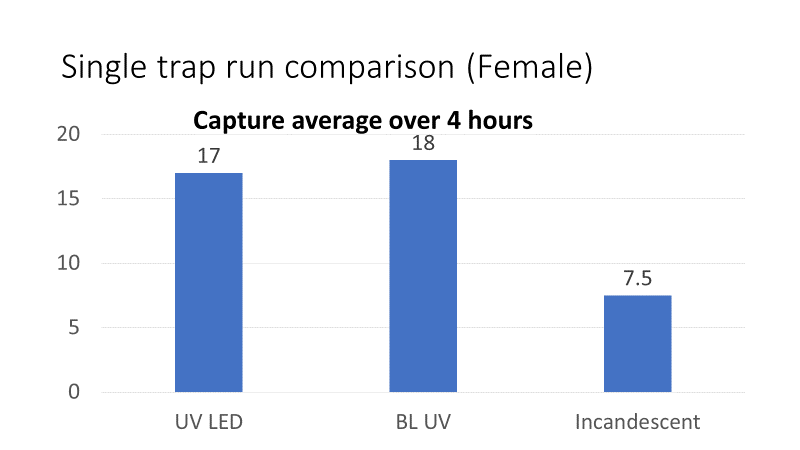 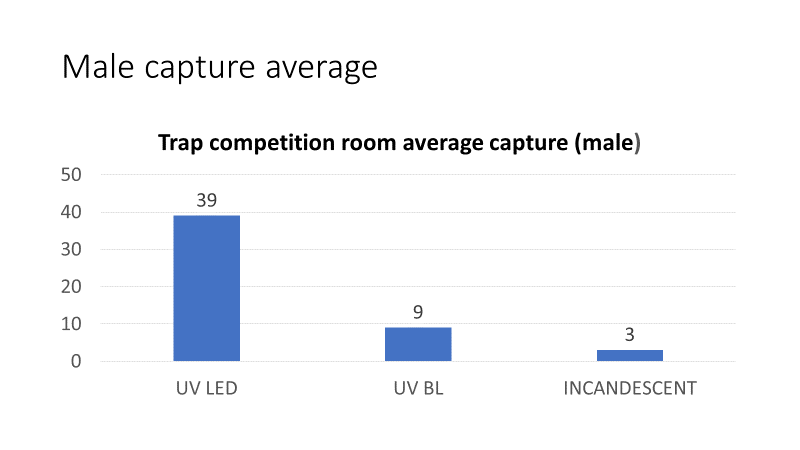 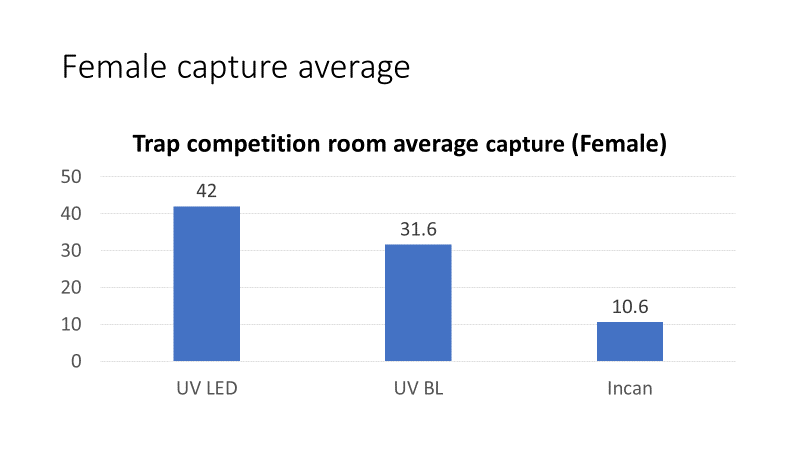 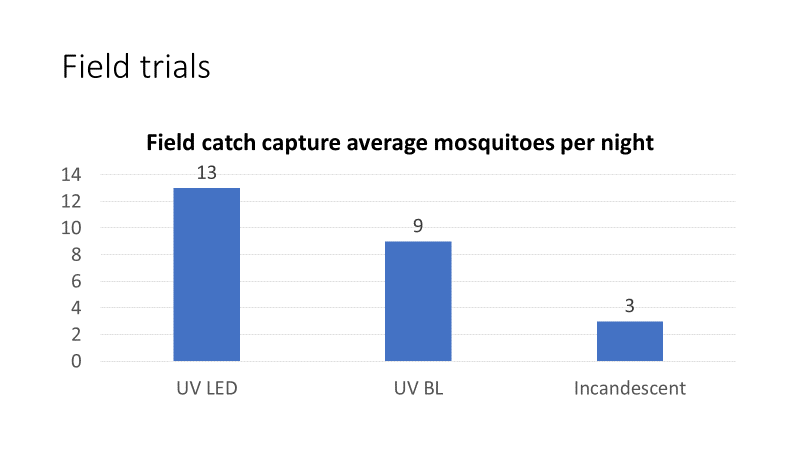